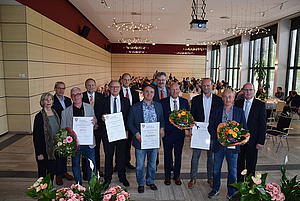 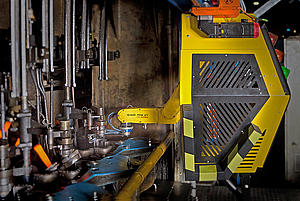 Swabbing "on the fly" - without production losses 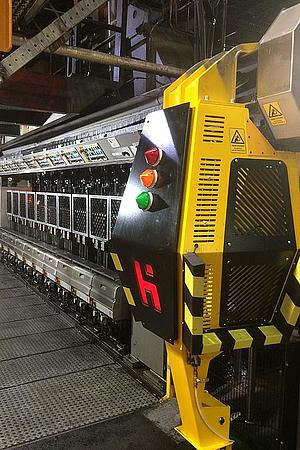 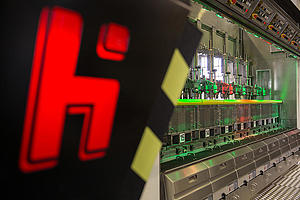 Industry 4.0 concepts in a modern glassworks

The Heye swabbing robot is a milestone in automation and innovation at the glassworks. With more than 50 years of expertise of Heye International and its glass experts, this application for industrial container glass manufacturing was launched.

Heye International is pleased to have taken third place in the prize awarded by the district of Schaumburg. It is already the third time that Heye wins this prize. On May 21, the award was presented by official representatives at a ceremony.

During manual swabbing by the machine operator and conventional robot concepts, the respective station must be stopped for each swabbing procedure. The operator then swabs  the moulds manually with the aid of a quast. As a rule, this eliminates two production cycles and does not swab all parts of the mould in the correct position and with the correct and equal amount. In addition, the machine operator must go near the current stations, which is a potential danger. Furthermore, the operator has to interrupt other works. In general, a swabbing process must be done every 20-30 minutes.

Economic impact and use

In most applications the new robot swabs the moulds at the individual stations "on the fly", i.e. during operation. The gob loading does not have to be interrupted, which increases the productivity by up to 3% and thus the economic efficiency of the machine considerably. In addition, the robot has an innovative spray head, which brings the lubricant exactly where needed, exactly timed and in the required amount. The robot can dose the lubricant much more accurately than a machine operator. This lowers operating costs and protects the environment. Records have shown that the robot consumes up to 75% less lubricant than a machine operator during manual swabbing. The even and consistent amount of lubrication and application thickness as well as the specified swabbing areas ensure a repeatable production process. The machine operator has more time to devote himself to production optimization in other areas. Less critical defects and a longer mould lifetime have been experienced during the first years of commercial use. After all, the return on investment (ROI) is about a maximum of two years, depending on produced container.

On the way to the automated IS machine

Only by using a swabbing robot is it possible to implement various closed-loops and related automation routines on the machine as part of Industry 4.0 concept. Due to the consistent quality of the swabbing process, both the temperatures of the moulds and of the glass can be kept constant and thus the product quality can be kept at a continuously high level.